The Fear Factor (a sermon during the CoVID-19 pandemic) 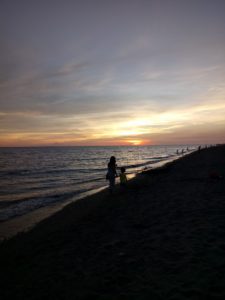 Once there once a TV show called – Fear Factor. Contestants were challenged to face their fears and if they overcome prize money awaits. Many were unable to go further, because fear often influenced the outcome. Fear is one of the most common human emotions that we all have to face daily in small amounts or in tremendous quantity or even variety.

Wikipedia: Fear is an emotion induced by a perceived threat causing animals to move quickly away from the location of the perceived threat, and sometimes hide. It’s a basic survival mechanism occurring in response to a specific stimulus, such as pain or the threat of danger. In short, fear is the ability to recognize danger leading to an urge to confront or flee from it (aka fight-or-flight response) but in extreme cases of fear (horror/ terror) paralysis response is possible.

Additionally, fear is frequently related to specific behaviors of escape and avoidance, whereas anxiety is the result of threats which are perceived to be uncontrollable or unavoidable. It’s worth noting that fear almost always relates to future events, such as worsening of a situation, or continuation of a situation that is unacceptable. Fear can also be an instant reaction to something presently happening. All people have an instinctual response to potential danger, which is in fact important to the survival of all species.

One of the most common or most searched for the past few weeks probably would be CoVID-19, corona virus, pandemic, contagion or probably lockdown. That’s why we have masks, hand gels or alcohol sprays because we are fearful of something that we cannot see right now.

One of the most common is the fear of public speaking. People may be comfortable speaking, but when it comes to public speaking, fear enters in the form of suspicion whether words may not be correct enough to be judged by others. Common fear can be of pain, which in a plausible situation brings flinching, or cringing.

Fear is a powerful motivator – it can either make you or break you. There are many examples of people in history who showed how fear was used as a tool for either their success or downfall.

To further understand fear as it relates to our lives and our spiritual journey we’re going to look at two men’s response to fear. They say you can gauge in a person’s character how he would cope with stress or fear and so let us see if that is true and if we can relate to them.

Jude: He thinks before he talks. Analytical, intelligent and apparently mature. He is meticulous and professional in his dealings. He keeps his thoughts to himself most of times. He is an independent worker and thinker. He is self-assured yet competitive and that’s why he always volunteers or initiates.

Pete: He is very impulsive. Acts right away often times without thinking. He is naive or simple-minded at times. He is rough and sometimes unprofessional; highly emotional (wears his heart on his sleeve). Relies heavily on teamwork: Always needing affirmation from others. Competitive or ambitious, but lacking in self-esteem and initiative. He goes with the flow.

To whom do you easily identify with? Some may say they are more Jude than Pete. Or a mixture of both? In the church or in your work places, who would you prefer to have?

Jude is actually Judas Iscariot – one of probably the best and brightest among the disciples. He took matters into his own hands by betraying Jesus. He had a plan in mind how to kick-start the kingdom of the Messiah on earth, and he made sure he was paid (or credited) for his efforts.

Then the fear factor emerged – he became so afraid that when Jesus didn’t fight back but instead meek as a lamb was condemned to die. He did something wrong, he knew it. Fear engulfed him and in remorse he gave back the 30 pieces of silver.

Matt 27: 4-5 – saying, “I sinned; I handed over to you an innocent man.” The leaders answered, “What is that to us? That’s your problem, not ours.” So Judas threw the money into the Temple. Then he went off and hanged himself.

What happened next was so disturbing, he was so overwhelmed by fear and his emotions that he took his own life. Sadly, he never found redemption.

And then, we have Simon Peter, who so boldly said in Matt 26:35 – “But Peter said, “I will never say that I don’t know you! I will even die with you!” Yet he still did…yes, we all know he tried to defend Jesus in the garden, but then the fear factor engulfed him in the courtyard.

Matt. 26:74-75 –“Then Peter began to place a curse on himself and swear, “I don’t know the man.” At once, a rooster crowed. And Peter remembered what Jesus had told him: “Before the rooster crows, you will say three times that you don’t know me.” Then Peter went outside and cried painfully.”

What happened next was inspiring – he was one of those who ran to the empty tomb to find for any evidence of a risen Christ. After Jesus went up to heaven, Peter by of the Holy Spirit became a leading witness for the Lord who brought thousands to the throne of mercy. He became fearless and found redemption in the sight of God.

Let us look what fear revealed through them, so that we may also learn.

But on the other hand, Peter moved from that phase to the next. He looked up to the source of power to overcome. He humbled himself to know he is incapable…he looked up and found the solution.

In a world where survival of the fittest is the norm, acceptance of weakness to attain power should prevail. It is foolishness based on the world’s standards, but it takes humility and complete surrender to overcome the most dreadful of trials.

Peter surrendered his life fully to the Master and he received forgiveness, peace and power – and that my friends made a great difference.

Is there fear in you, brother concerning a sin (even habitual) you’ve done of the consequences of it? How about your problems in family or in relationships or even in finding a partner for life?

Are you trembling now sister just thinking of the uncertainties of your health or what the future holds?

Are you afraid of not having enough to support yourself or your family? Afraid that you will not get another contract for the next school year or your company will go bankrupt?

Afraid your child might not grow up as you want them to be or even not grow old at all because of an illness?

The thing is, be it you are calculating like Judas or impulsive like Peter – on your own you can never be prepared to face the uncertainties of the future. It takes a step towards the Christ who has gone through it and who is willing to go through it with you.

Let us read Joshua 1:9 – Remember that I commanded you to be strong and brave. Don’t be afraid, because the Lord your God will be with you everywhere you go.” In Deuteronomy 31:6 – Be strong and of a good courage, fear not, nor be afraid of them: for the Lord thy God, he it is that doth go with thee; he will not fail thee, nor forsake thee.

God is faithful…there is no need to be fearful.

It will not be long my brothers and sisters, things will be taken away from us. Our way of living our sources of living will be all gone…our homes, possessions and our families…it is very near…the enemy will strip us of all we hold dear…but let us remember – still God is in control. We know how the story ends…God is faithful…victory in Christ against sin and the world’s cares is for all eternity.

Let us ask ourselves now, what do we fear the most? Give it to the Master of all things so that he may take care of you.

John 14:27 – Peace I leave with you, my peace I give unto you: not as the world giveth, give I unto you. Let not your heart be troubled, neither let it be afraid.

The peace that only Jesus can give…peace beyond the troubles of this life, something we often have to learn unconventionally. For me personally, daily I’m learning more about God’s peace and trust through a small child – our son who has an auto-immune disease for years.

He is sick but he continues every day to learn of the ways of the Master through constant studying of scripture. There are times I find myself being jolted back to reality, after being in deep thought of the future, upon hearing him read or quote God’s word which brings peace to my heart.

This peace along with God’s faithfulness that made Daniel fearless inside the Lion’s den. This held the faith of the 3 Hebrew men while they were inside the fiery furnace. And this peace made the apostles rejoice even when they were killed one by one.

GOD is FAITHFUL to get us through.

In the Lord there is THE Hope of THE brightest tomorrow with goodness forevermore. Amen and Amen.

Today I leave you the words of David in Psalm 89:1-2 NKJV – “I will sing of the mercies of the Lord for ever: with my mouth will I make known thy faithfulness to all generations. For I have said, Mercy shall be built up for ever: thy faithfulness shalt thou establish in the very heavens.”