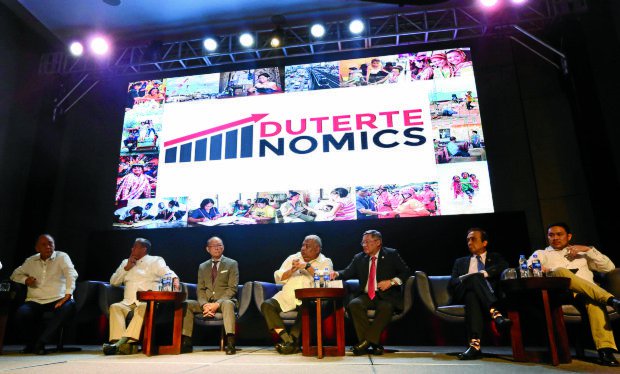 The Philippines as of late have been too focused on Duterte’s speech and actions. Several know-it-alls blamed Digong for the forex rate falling and even cast doom clouds over our economy.

I’d like to see these people now try to explain the recent top performing bounce back of our forex.

Can you please explain the most recent optimistic business projection from the business sector?

How about the good growth forecasts for our country by international agencies?

In a recent forum, while presenting Dutertenomics as the new golden age of infrastructure, the economic team highlighted huge projects on the way. These projects coming online would bring investments, jobs and boost our economic capabilities to facilitate inclusive growth for all Pinoys.

Amidst a heavily criticized drug war (Duterte critics), has updated and fixed systems that has bogged down government services and the economy.

The impact these would generate for the future generations is very interesting.

Would all of these finally move our dated service systems and infrastructure towards modernization?

What are other necessities that need to be addressed for our country’s macro and micro economic turn-around?

If the current administration would play their current cards right (and there are plenty of advantages for the country now) Philippines would be in a better position as a true economic marvel of Asia.

Until then, we’ll hear more grumblings from the critics even farther down the road. It’s not because this administration is under-performing (which is far from the truth), but because they’re just not into Digong.

I just hope they would stop several destabilization thoughts to progress, because this team deserves a chance; the same chances we gave to previous government leaders – who never got us far anyway!