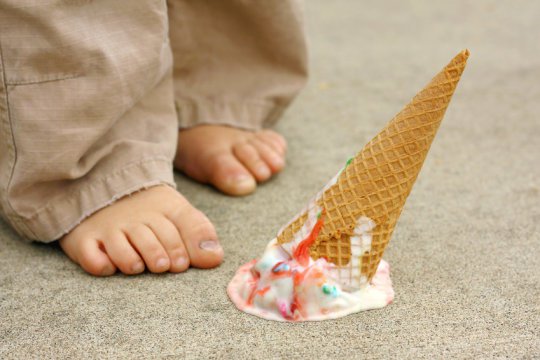 (This is an opinion on the article Researchers debunk ‘five-second rule’: Eating food off the floor isn’t safe from ScienceDaily.com on September 9, 2016.)

Quick! Pick it up and eat it right away!

Your food is still safe to eat as long as it’s within the 5 second rule.

We all have heard on about this since our childhood days. Most of us certainly believed it and continue to do so to this day.

But before we even pass on this (legendary) knowledge to the future generation, let us hear about a recent development.

According to recent findings of the School of Environmental and Biological Sciences, Rutgers University-New Brunswick, the 5-second rule isn’t safe after all.

Rutgers researchers have disproven the widely accepted notion that it’s OK to scoop up food and eat it within a “safe” five-second window. Donald Schaffner, professor and extension specialist in food science, found that moisture, type of surface and contact time all contribute to cross-contamination. In some instances, the transfer begins in less than one second. Their findings appear online in the American Society for Microbiology’s journal, Applied and Environmental Microbiology.

Not surprisingly, watermelon had the most contamination, gummy candy the least. “Transfer of bacteria from surfaces to food appears to be affected most by moisture,” Schaffner said. “Bacteria don’t have legs, they move with the moisture, and the wetter the food, the higher the risk of transfer. Also, longer food contact times usually result in the transfer of more bacteria from each surface to food.”

Perhaps unexpectedly, carpet has very low transfer rates compared with those of tile and stainless steel, whereas transfer from wood is more variable. “The topography of the surface and food seem to play an important role in bacterial transfer,” Schaffner said.

So the next time we spill or drop good food from our plates or hands, let’s just – let it go (like it says in Frozen). Bacteria nowadays can be really nasty and can cause all kinds of serious health problems.

This recent study also reminds us to handle our food well and not put it to waste. These reminders we’ve been told to do for years – come to think of it, might be the real reason why the 5-second rule became popular.

And, oh yeah, always wash your hands too!