Helping To Turn A New Leaf 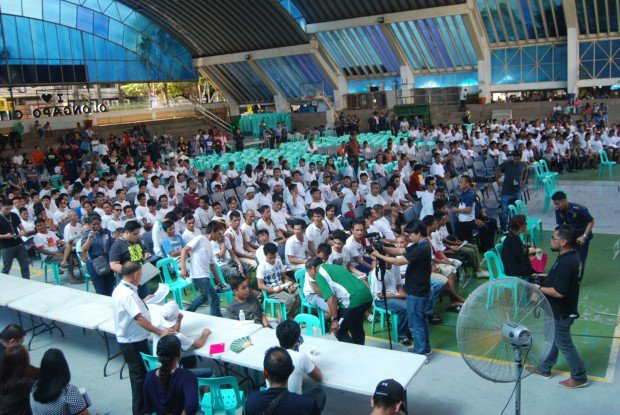 About 2,000 confessed drug users and pushers turn themselves in during a ceremony for mass surrender held in Olongapo City and Subic, Zambales, on Friday morning. The mass surrender is part of the police’s Oplan Tokhang program. ALLAN MACATUNO

(This is an opinion on the article There’s life after drugs, in farms and schools by Jocelyn R. Uy and Kristine Felisse Mangunay for the Philippine Daily Inquirer on July 22, 2016.)

The Technical Education and Skills Development Authority (TESDA) centers nationwide would soon be open to give former drug addicts and dealers a second chance in life to be productive and clean members of our society through livelihood learning programs.

As thousands surrendered (all around the country) in fear of the new administration’s (Duterte’s) relentless narco war, they would have to be given an alternative to make a decent living (lest they go back to their old ways). This is a welcome development as we can clearly see that there is still a place for them to be law-abiding citizens fully integrated into our society (a refreshing news amidst all bloody reports we’ve seen and heard so far).

“This is in response to reports of convicts and inmates who resort to their old trade after serving time in jail because they have no other means of livelihood,” newly appointed Tesda Director General Guiling Mamondiong yesterday said.

Mamondiong said the convicts can “have a second chance in life” by learning skills in agriculture, metals and engineering, information and communications technology among others. They could also be trained to be health givers or massage therapists.

The Tesda chief said the agency would take the lead in this project in collaboration with the Department of the Interior and Local Government (DILG).

Senator Cynthia Villar meanwhile said those who surrendered could also be given training in “farm tourism camps” where they would be taught modern agricultural techniques and “urban gardening”, among others.

“One way of making use of our farm school that we are promoting is for them to accept the rehabilitation of drug dependents,” said Villar, who chairs the committee on agriculture.

All over the nation, several progressive and fruitful programs have been adopted – teaching new methods of modern farming, urban gardening, requesting drug peddlers and users to surrender peacefully, mandatory Zumba sessions and counseling sessions for those who are and were involved in the illegal drug trade (a wonderful alternative in my opinion). This would really give each a chance to turn a new leaf.

Yes, there is still hope for them. There is hope also for a peaceful and better tomorrow for our motherland.