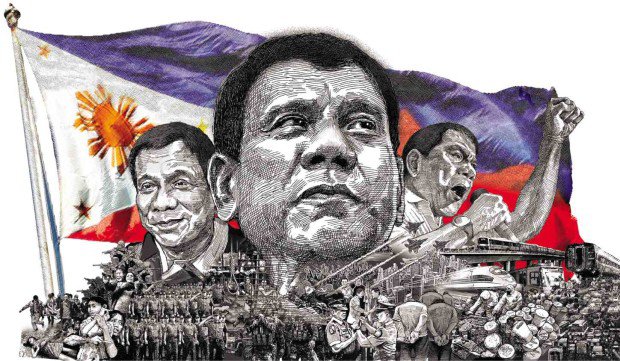 (This is an opinion on the news article, Duterte to be sworn in as president, launch crime war, from inquirer.net in June 30, 2016.)

Finally, we are here – the official declaration of President Rodrigo Duterte.

A majority of the Filipino population embraces this transition from the previous administration (deemed to be too laid-back at times) to the firebrand new leadership personified by the tough-talking lawyer and long-time mayor from Davao. They are in high anticipation for the fulfillment of the promise of a brighter tomorrow or as the campaign slogan stated – “Change is Coming.”

Swept into power by frustrations and restlessness of the downtrodden as he rode a campaign of radical reforms specifically to combat crime and corruption in the lower and higher ranks of society, Duterte won by a huge mandate. A mandate that states he is our appointed savior with the answers most of us are longing for.

As weeks of waiting for his proclamation went by, Filipinos from all walks of life (in the Philippines and abroad) started to wonder about the supposed changes just right around the corner. Questions of fairness, legalities and even acceptance within the national and international levels were raised.

Will he give the oppressed a chance to be heard?

Will his administration make things better in its overall services?

Real peace and order in our country?

Enough food in our plates?

These are all valid questions to be considered, but mostly the answers are to be confirmed only after his 6 year term is done. A new chapter commences for our beloved motherland – The Philippines.

As the final minutes and seconds tick towards his oath-taking, let us be reminded of the challenge of change that Duterte would likely embody. Yes, “Change is Coming” – change that should start in each Filipino to make our country great once again.