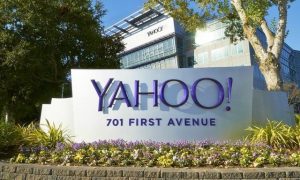 (Photo from Yahoo! via CNN)

(This is an opinion on the article Verizon is buying Yahoo for $4.8 billion by Cristina Alesci, Seth Fiegerman, and Charles Riley, CNN Money as seen in cnnphilippines.com on July 26, 2016.)

After years of potential buyers and negotiations the time has come, Verizon has agreed to buy Yahoo (an search engine and web portal pioneer company for 2 decades; a synonymous brand with the internet in the late 90’s) for $4.83 billion. Verizon now takes over Yahoo’s more than one billion monthly active users in the process (I still use actively my Yahoo Account and Mail).

The deal expected to be finalized in early 2017, sets Yahoo to be integrated with AOL (They continue to get bigger).

Current Yahoo shareholders gets to keep investments in Alibaba and Yahoo Japan.

It also ends a turnaround effort by Marissa Mayer, who joined Yahoo four years ago and promised to revitalize the company. Verizon and Yahoo have not commented on who will lead Yahoo once the deal is complete.

It’s unclear what Mayer will do after the deal closes. A spokesman for Yahoo said it’s “too early to say” whether she will stay on as CEO, accept a new role at Verizon, or step aside. Meanwhile, Mayer says she will stay on to see Yahoo through its transition.

“For me personally, I’m planning to stay,” Mayer wrote Monday in a memo to employees posted on Tumblr. “I love Yahoo, and I believe in all of you. It’s important to me to see Yahoo into its next chapter.”

On a conference call with analysts after the announcement, Mayer repeated that line before adding, “A lot of the integration discussions are still ahead of us.”

Back in 2008, Microsoft made an offer of $45 billion for Yahoo, but co-founder Jerry Yang declined (they were huge before, but now they have to settle for less).

The markets on Monday was not too kind on this news as Yahoo shares went down 2%.

The next chapter for Yahoo is just around the corner.