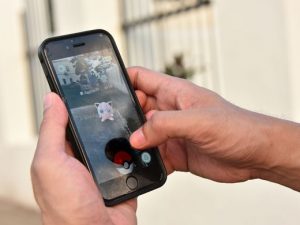 (This is an opinion on the article ‘Pokemon Go’: Craze sweeps the nation and is poised to surpass Twitter by Erica Evans and Rick Anderson from the Los Angeles Times on July 11, 2016.)

The world has gone nuts on the latest Nintendo creation, Pokemon Go. The 1990’s hit franchise is hip once again with its new “augmented reality” factor, bringing in the dough for the Japanese video game/software company to the tune of $7.5 billion added to their market value.

Debuting just last week, users from all walks of life and in different continents have been hunting down one Pokemon after another in offices, schools, hospitals, parks, and backyards. It is a quest to gather (for them the holy and electronic) Pokeballs scattered around the globe to be used to do battle with the pocket monsters (wow, I even sound like I’m into it).

It has also given almost every active player a chance to check out their usual mundane surroundings and find excitement in discovering new stuff about it (surprise?) and finding a new sense of appreciation. Also a bit more of face-to-face interaction between people (especially in our current technologically wired society) can be attained in game play. For these, we should thank the Pokemons!

But then, there are real dangers along the way that we’ve heard or read about;

As the app continues to gain steam (set to shatter the popularity of Twitter in terms of active users in Android devices), it also gave the game developer Niantic Inc. and investor Nintendo a badly needed shot in the arm (has struggled for a decade now after the success of Wii)! A smash hit indeed!