The Franchise – Dirk, KD and DWade 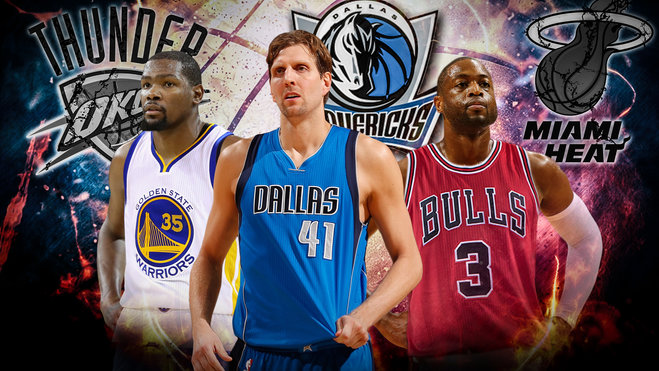 What is a franchise player? In professional sports,  it is a player with superior talent whom the management deems rightful to build around on with complementary players to come up with a competitive team. Oh…and gets the best contract deals and endorsements also.

The recent off-season wheeling and dealing of NBA teams/players showed the way things are in the ever changing landscape of professional basketball. We saw some familiar names staying put (and rewarded for it), others seeking greener pastures (and titles) and others asking for a bit of loyalty, but then had to walk away in frustration.

Dirk Nowitzki, a German player was drafted 9th and later traded on that day by the Milwaukee Bucks to the Dallas Mavericks in 1998. He has been a fixture in Dallas ever since, surviving the break up of the original Dallas Big 3, playoff exits (including them being a No.1 seed team defeated by No.8 seed) and a NBA Finals Mavs team meltdown back in 2006 (after leading 2-0; Dirk was season MVP also) against a Miami Heat team led by Shaq and DWade.

He remained loyal to the Mavs even though he as wooed by other teams in his free-agency. He opted to stay and have smaller deals to be in the title hunt. In 2010, the Mavs got an NBA title. Dirk was the Finals MVP after a clutch performance for the ages (awesome).

Dirk was rewarded today by the team, in his twilight years as a player, with a 2-year $40 million contract (even though they might be far from title contention).

Kevin Durant came into the scene as 2nd overall pick in 2007 by the Seattle Supersonics. The team later relocated to Oklahoma City to become the Thunder.

He blossomed to a multi-time scoring champion, multi-time All-Star and a season MVP. Given a huge extension in 2010, he continued to contribute to their success until they reached the Finals but fell short in 2012.

Years passed by since, but OKC failed to make it back (coming close last season). As he hearkened free agency once again, KD found himself with a decision that he needed to do…he decided to join a championship team – the Golden State Warriors, to be able to contend for a title once again while he is still in his prime.

Dwyane Wade was drafted by the Miami Heat in 2003. He then went on to become a multi-All-Star, a Finals MVP and multi-champion (once with Shaq & 2 times with LeBron & Bosh) in South Beach.

He would usually have no problem in taking a pay-cut to lure in big talents to the Heat to help build a title contender (even though he was the team’s all-time leader in all stats)…until last week.

DWade, after several years of sacrifice and dedication to his status in Miami (He called himself a Heat lifer), didn’t get the contract he justly deserved for years; he accepted (with a lot of sadness) his hometown Chicago Bulls’ offer of a 2-year $47.5 million contract over the Heat’s (a mere $7.5 million difference). The truth is he might be far from having a legit title run on both squads.

What is a franchise player?

In professional sports, the definition continues to change with the times based on a particular team’s perspective of their current position in their ultimate goal of winning a championship.