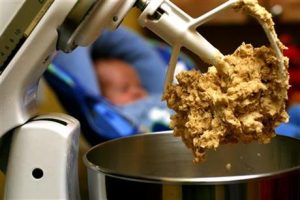 FILE – In this undated file photo, cookie dough clings to the beaters of a standing mixer. The Food and Drug Administration issued a warning on June 28, 2016, that people shouldn’t eat raw dough due to an ongoing outbreak of illnesses related to a strain of E. coli bacteria found in some batches of flour. (AP Photo/Larry Crowe, File)

(This is an opinion on the article FDA warns against eating raw dough amid E. coli fears from the Associated Press in bigtorsy.ap.org in June 30, 2016.)

Raw dough while mom is cooking is one of the most irresistible things in life. There’s nothing like having a bit of it being eaten from a teaspoon (or the spatula) or licked off your fingers.

Do you remember the time when you would sneak a taste of cake or cookie dough while your mom or spouse is preoccupied?

Well, according to the Food and Drug Administration (FDA), we should not eat raw dough or batter of any kind due to an ongoing outbreak of illnesses related to a strain on E. coli bacteria present in some recalled flour. Even, raw dough for children’s homemade play clay or used for making ornaments should not be used especially before eating their meals.

A General Mills facility in Kansas City, Missouri has voluntarily recalled 10 million pounds of contaminated flour last month. Centers for Disease Control deduced just this month that it is “the likely source of dozens of illnesses in 20 states related to a strain of E. coli.” General Mills affirmed this through a positive test for E. coli in a sample of the recalled flour.

“Many people infected with the bacteria suffer bloody diarrhea and abdominal cramps. Kidney failure is also possible. At least 10 people have been hospitalized due to the outbreak. No deaths have been reported.”

For now, I guess, people should think twice before reaching out to have a taste of that irresistible batter. A few seconds of self-control is all it takes for one to stay healthy.

Okay. Now, I will patiently wait for the finish product instead.

This is going to be hard.