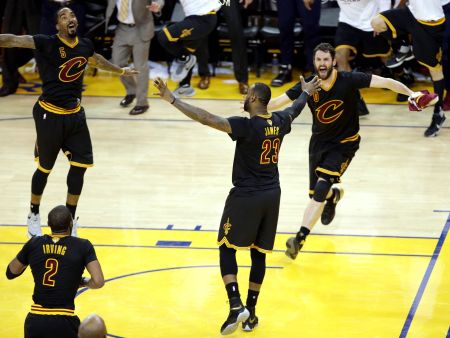 It’s been over a week since the NBA Finals series between The Cleveland Cavalier and the Golden State Warriors ended, yet people are still talking about the most unlikely championship win in LeBron James’ career – a come-from-behind triumph worth remembering.

One of the biggest stories of championship victory in modern sports history started to unfold back in the summer of 2014, where we saw LeBron seemingly held the NBA hostage during a frenzied free agency period. He left his Miami Heat running mates Wade and Bosh, after appearing in 4 consecutive Finals series and winning 2 titles, to pursue for Cleveland the elusive NBA championship.

He came back and boldly promised to win a title for the Land. Acting as a pseudo-General Manager, he helped assemble a unit patterned on the 3-headed All-Star monster team he had in Miami.

Cleveland’s anticipation of ending their professional sports championship curse was fueled by a new look roster led by sensational Kyrie Irving at the point, former Minnesota Timberwolves All-Star Kevin Love at power-forward and (the best player in the world) LeBron “King” James at small-forward. Their goal was to steamroll through the Eastern Conference opposition all the way to the Finals.

They made a great run that season, even though (Coach) LeBron overruled most of Coach Blatt’s on and off court decisions as well as in-fighting between the team’s stars. By the time they reached the playoffs, things deteriorated rather quickly. Kyrie and Love both went down with injuries, leaving LeBron to lean more on unstable J.R. Smith, basketball pest Matthew Dellavedova and the lumbering giant Tim Mozgov.

LeBron, who was so used to being a “Llamado” (heavy favorite) in his Miami Heat days and in his regular season return with the Cavaliers, became a “Dejado” (underdog) as he had to contend with a young and very healthy firepower filled team in the Golden State Warriors led by freshly minted MVP Steph Curry.

The series began with great promise, the Cavs grabbed a 2-1 series lead only to see it slip away from their grasp. The Dubs responded and adjusted to James’ herculean series effort (horrible efficiency rating though) with their brand of small ball basketball, great defense and dead-eye shooting from almost anywhere on the floor.

The end result? The Golden State Warriors ended their 40-year NBA title drought by beating the Cavaliers in their home court.

The bitter taste of defeat gave LeBron and the Cavaliers extra motivation to try to get back in the Finals the next season. It also gave the media, and the rest of us, high drama soap opera entertainment complete with blown games, players only meetings, Twitter slights (mostly from James and Love), reverse psychology motivations (mostly from the King) and a betrayal in the form of Coach Blatt’s firing (claimed to be a decision by the management with no LeBron input).

Meanwhile out in the West, the Golden State Warriors were having a season for the ages by winning games in frantic fashion with their very confident small ball lineup. Led by Steph Curry’s out of this world regular MVP season performance, it was evident early in the season that they might have a chance to catch the hallowed MJ Bulls 72-10 regular season win-loss record.

Very few teams were able to match well with their pace and firepower, making each contest like a streetball exhibition game complete with awesome highlights, super long-range shooting spectacles, lots of shouting plus muscle flexing (mostly from Green) and whole lot of shimmies (from MVP Steph Curry). This led them to achieve the best regular season record in NBA history at 73-9.

When the playoffs arrived, the Cavaliers powered through the East leaning on their Big 3. The Warriors on the other hand had to go through several early round injuries and win-or-go home games just to get to the Finals for a rematch with the Cavs.

The Finals started once again with LeBron as a “Dejado” based on their regular season record against Curry’s team, and it looked the same as before early in the series as the Cavs tried to keep pace with the Dubs’ brand of basketball. Even though the Golden State Warriors’ relied more on their role players early in the series, LeBron and company were frustrated to no end which made each of us fans think that we were watching a mismatch.

We all started to feel sorry for the eternally “Llamado” LeBron, as he along with his teammates were battered by the Golden State Warriors. They later found themselves staring at a 3-1 deficit.

And then at the tail-end of Game 4, things went south for the Dubs. Green literally crotch chopped (missing though) the King after LeBron, in frustration, walked over him. Green was suspended for Game 5, an unfortunate event that led to several trash-talk, tweets bordering on questions of manliness and conspiracy theories.

From Game 5 onwards, LeBron and the Cavs found a certain rhythm, an understanding to work together and watch each others back for every remaining game until the final buzzer! Climbing from a 3-1 deficit, they rode the efforts of Kyrie’s new-found confidence to dominate and LeBron’s confidence in giving others in his team a role on the court.

They then forced a Game 7, and won it in their opponents’ home court (for revenge purposes, I believe) to end Cleveland’s championship curse.

What made this championship moment sweeter in the eyes of King James’ fans?

This feel good story  was made complete when the rarely “Dejado” (underdog) LeBron James (yes, he cried once again) and his often dysfunctional Cavaliers team (they overcame adversities – manufactured or real) snatched a come-from-behind victory over the “Llamado” (heavy favorite) Golden State Warriors, believed to be too great and far more superior as a whole than any other team during the bulk of the 2016 NBA season.